Friends, enemies, processes, and the law

A long time ago I read a disturbing quote in a news article. It stuck with me for its arrogant candor and the way it describes a cyclic loop between cause and effect:

For my friends, anything; for my enemies, the law.
-- Oscar R. Benavides, President of Peru, 1933-1940
Two military coups adorn Oscar's otherwise unremarkable biography, but this entry is not about presidents, it is about processes.

Throughout our careers we are often entrusted with the responsibility over services, solutions and products, which also include the task of owning their requirements management processes. Not being a military president, it is usually in good taste to avoid hanging a frame with that quote on your wall or adding it to the home page of your project web site. Fun, but not in good taste.

Despite one's best efforts to maintain an impartial stance towards the process, the source of a requirement is an overwhelming factor when assigning priorities. It does not take long before a divisive line forms between those who get more of their requirements answered and those who get stranded in the "futures" bucket. Once the separation line forms, it is also not long before you have the equivalent of friends and enemies in your hands. 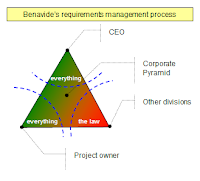 In fact, attempting to equally include the requirements from all sources is not a sound practice, but a guaranteed way of creating an offering that will not please anyone. There is a lot to be said about the open-source model and its way of allowing the people neglected in the prioritization process to contribute their requirements, but there is always a limit on how open a project can really be.

Barring infinite resources to implement all requests, it seems to be a good idea to rotate the owners of an offering every couple of years; even more so when resources are scarce and the populace of the discontent stops distinguishing the process from its owner.

The process may be even more grueling while developing shared components in a large organization, where the somewhat direct access between the lines of management allows people to manifest their discontent through escalations. When resources are really scarce, the project owner soon finds his time consumed in justifying his choices or creating elaborate reports on why certain requirements cannot be implemented. 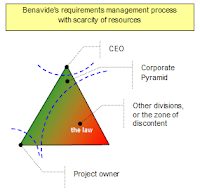 Once management chains are involved, the technical evaluation process starts to suffer from a quota-based approach where there are no longer friends and enemies. The entire user-base becomes an amalgam of former-friends and truced enemies; the first displeased by the politically-induced loss of status and the latter by a handful of requirements forced into the product at gun point.
at March 17, 2007