Marx's "Capital" is a fantastic reading by those who want to understand the work relations in any industry. Once you blow past his more activist views and adjust his theories with 160 years of technological evolution, you will have developed a newfound respect for the unwritten laws governing the workplace.

Before getting to the point of this entry, it is necessary to clear the air for the discussion.

One of Karl Marx's (1818-1883) central ideas was that communism was a natural evolution of mature capitalism; "natural" being the subtle distinction missed by those who used his work as the springboard for the Russian Revolution of 1917 and the violent suppression of its enemies.

Four decades later, with the world's very existence being wired to red buttons in command centers and suitcases, demonization and fear mongering were the words of order; Marx's theories were irreparably damaged in the eyes of entire generations; bystander victims of the McCarthyist movement and its decade-long assault on civil liberties.

Labor alienation is a central aspect of Marxist theory, a natural response from human beings to the sale of their work in exchange for capital. Marx analysis is certainly more suitable to lower-skilled activities involving mass-production of goods, but knowledge workers are even more susceptible to the effects of Marxist labor alienation. These effects are described in the following entry from the Stanford Encyclopedia of Philosophy (the bold markups are mine):


Marx famously depicts the worker under capitalism as suffering from four types of alienated labour. First, from the product, which as soon as it is created is taken away from its producer. Second, in productive activity (work) which is experienced as a torment. Third, from species-being, for humans produce blindly and not in accordance with their truly human powers. Finally from other human beings, where the relation of exchange replaces mutual need.

Any of these symptoms can keep an executive or team lead awaken in the middle of the night; after all no one wants to be around (1) a colleague emotionally detached from the results of his/her work, (2) an abusive colleague or boss that makes the work environment a living hell, (3) employees disgruntled for not using their best talents in their current job, and (4) employees that work in isolation from the rest of team.

The educated work force of the 21st century is more prone to muffled contempt that open revolt, but either reaction is damaging to productivity and contrary to the ultimate goal of capital accumulation. Some of the solutions underway are a tacit acknowledgment of Marx's thinking as they aim squarely at the effects of labor alienation.

There is an increasingly stronger focus on committing employees to the results of their work, making the best of their talents and emphasizing work relationships as the foundation of success. IBM, Microsoft and HP value statements are a clear reflection of those tendencies. Barring the natural inertia in the realization of any change in a large business, these are the directives being landed on the desks of the people managing the work force.

Interestingly enough, companies do not need to share more of their capital with employees to counter the effects of labor alienation. Factors #2 (work environment) and #3 (proper use of skills) are not even related to compensation. Factors #1 (attachment to work product) and #4 (individualism) can be effectively targeted through changes in compensation policies rather than increases in the payroll.

There is value in a hybrid communal system where the compensation policies promote performance-based compensation but also collaboration and collective results. The idea is to avoid completely individual evaluations on one extreme and a company-wide pool of comparison on the other extreme.

There will always be room for above and below average contributions, but there should be less opportunity for individual above-average performance within a team that does not achieve its goals. Contrary to popular belief, unequal performance is also part of Marxian thought. 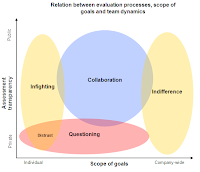 A significant challenge in implementing the hybrid system will be the association between end-results and the individual contribution to those results. An employee may leave a department or product area long before the first customer-satisfaction survey is turned in. Devising a workable model seems a good theme for a PhD thesis or a best-selling book. Drawing a parallel to Marx's predictions about communism as a natural evolution of mature capitalism, this new hybrid model will be a natural evolution of mature work environments.

The widespread yearly assessment model is more manageable because performance is measured on a comparative basis with other employees in the company and in the industry. On the other hand, this model is somewhat detrimental to the companies when the product release cycle exceeds the yearly checkpoint. It is detrimental because it precludes the customer satisfaction from being factored into the compensation policy. The lack of immediate association between compensation and work results is a catalyst to labor alienation.

Embracing Marx's views is not about violent overthrow of governments and arbitrary confiscation of property.

For practical purposes, Utopian communism is a distant reality better treated as a virtual impossibility, but the tensions between labor and capital explained by Marx are inevitable and real.

A better work environment awaits those who are willing to learn the mechanics behind those tensions, either preempting the causes or managing the symptoms.
at April 18, 2007