“And if you take a sheep and put it up at the timberline at night when the wind is roaring, that sheep will be panicked half to death and will call and call until the shepherd comes, or comes the wolf.”

Robert Pirsig, in Zen and the Art of Motorcycle Maintenance 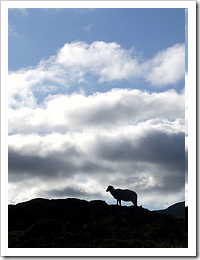 I started writing this entry months ago, under the crushing pressure of emails from friends and colleagues telling me about their layoffs.

In the spirit of true empathy, I assessed the what-if possibilities of not having a regular paying job, and each scenario felt more overwhelming than the previous. I also felt depressed for not being able to offer any material help to my fellow colleagues, not owning a company that employs people, not holding a position where I could influence the creation of a job.

Along the way, I benefited from inspiring emails from others looking ahead with optimism and hope. Not the least, I was inspired by my brother’s recent choice to abandon a cushy management job at a large construction firm to start his own successful business.

Once the jumble of thoughts settled down a few days ago, the imagined experiences of my what-if assessment sunk in too deep.

Starting last week, I chose to see the world in a different way, a world where either we live waiting in fear or we live acting on the basis of technique and choice.

A world of sheep, wolves, and shepherds

I now see our world as a collective of sheep, wolves, and shepherds. Once you fully realize that separation, you can never accept facing the world as a sheep.

Behaving like a sheep is about making as few choices as possible, settling into a stable situation and hoping things will not change. Sheep intentionally put their fates at hand of shepherds and unknowingly at the mercy of wolves. Time after time, sheep seek seemingly safe settings and stay there until the inexorable dangers of political and economical instability surround them again. Sheep regard being outside a wolf’s stomach to be a good life, and being inside the wolf’s stomach the result of random and cruel chance.

A shepherd lives a life of making choices for himself and for others, a life of little rest and great responsibility. Shepherds are far fewer in number than sheep and looked upon when the smell of danger spreads in the air. A shepherd may falter under impossible odds, watching a wolf snatch the stray sheep while protecting the main group from a larger pack of wolves, but a good shepherd never looks back. A great shepherd never blames the odds.

Wolves also thrive in making choices, but about making choices about their own lives, not taking great interest on shepherd and sheep other than for the occasional feeding.

At the root of sheepish thought is the belief that we cannot influence the events around us. That is partly true, but we do have control over our preparedness to face those events.

The correct thought is “I refuse to be eaten helpless in the middle of the night. I will take charge of my immediate surroundings to reduce the influence of negative events in my life.”

You see two clear choices in the corrected thought: the refusal to stay helpless and the choice to take charge of the surroundings. What you may miss is that they are both empty in absence of technique; it is easy to shake a fist towards the sky, it is much harder to raise the rest of the body out of shifting sand.

There is also the deep realization that it is a whole different world to keep an entire flock out of shifting sand. Each person who oversees a business, whether a line manager, an executive, or a small business owner, is a shepherd. It is easy to ignore the crushing pressure these times bring upon the shepherds, more so amidst the carefully chosen “golden-parachute” sound bytes picked by what passes for mass news nowadays. The exception is not the rule.

Choice is at reach for all of us, but it does not happen overnight. The power of choice is multiplied by the choices at hand. If we wait until disaster hits to start making choices, we may find out that there are only bad and worse choices. When all alternatives look bad, we are likely to feel paralyzed. Depending on how despairing the situation, we may even wish for the wolf to come out of the woods and end our misery.

In my mind, these are the most important choices any person can make today:

I have seen many a people losing important time in the period after receiving their job loss notice polishing resumes, reestablishing their network of contacts, assessing the possibility of seeking a new job or starting a consultancy, and pondering over many other important decisions. At best, the unpreparedness force uninformed choices, at worst it translates into months without a source of income.

The silver-lining: a renewed sense of urgency

Amidst all crisis and sense of doom, the one positive aspect I see is an opening for a renewed sense of urgency. It used to be that a botched project was followed by the opportunity to try it anew with the next big project. “It is only a job” was the theme song for lax execution and the launch of shoddy products.

My favorite example is the GM of the 90s and early 2000s, where the widespread lack of care with production could be seen in the news and at the dealership lots: union workers making three times the salary of peers working for competitors, dated pushrod engines, Pontiac Aztecs, misaligned body panels, visible mold lines in the interior plastics, you name it. It was not until Bob Lutz came aboard in 2002 that serious improvement started to be seen, to the point where I even put some of their cars on my window-shopping list. The tragedy was that all those years of carelessness and inaction took their toll and made GM’s position untenable when the recession hit.

I think that that kind of example and the lessons that go with it are about to permeate corporate America: A botched project will not be followed by another chance, but by a round of layoffs.

There is a clear opportunity for those who really care about their customers, and ultimately their jobs and businesses, to carry that flag and instill that sense of urgency in the workplace pushing for better requirement definitions, better market validation, better execution, better customer support, and that extra mile on end-user satisfaction.

Economies may stall or even shrink, but executives who manage to reshape their workforce and employees who embrace the new mindset will learn quickly that the size of the slice matters more than the size of the pie.

As sheep and shepherd have always known, collective preparedness is the ultimate safeguard.