"Underlying most arguments against the free market
is a lack of belief in freedom itself."
Milton Friedman 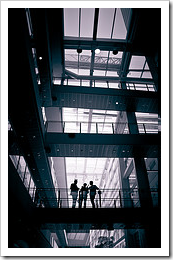 A few months ago I took on a personal challenge, of imagining what it would take to achieve the next giant leap in productivity in the workplace. Strangely for someone used to push for improvements in requirements management processes and for the development of deep skills, this time I found myself in the philosophical land of long term vision.

As for the title of this posting, the idea started while watching the excellent documentary “Commanding Heights: The Battle for the World Economy”. Coining from Wikipedia: “[The documentary title] takes its title from a speech by Vladimir Lenin, who used the phrase ‘commanding heights’ to refer to the segments and industries in an economy that effectively control and support the others…”

“The Battle for the World Economy” explores the role of the state in building an economic system, first under the lens of John Keynes, who believed governments could control the markets; later from the redeemed point of view of Friedrich Hayek, who advocated in favor of markets regulating themselves.

Whereas the difference between nations and corporations is not lost on me, the similarities between a central control body and a vast array of somewhat free agents interacting with each other are striking. If the micro-cosmos of the corporation is the economy, the work force is its industry.

The greatest challenge of our leadership is not how to control the readiness of the workforce, but how to make the workforce assume control of the enterprise under a clear set of rules. In other words, the challenge is how to favor direction over control.

…and employees as free agents

It has been the norm for companies to rely on human resource management to motivate the workforce, an attempt at restoring some of what is lost at the very moment a free-agent sells his time and talent in exchange for a salary.

The irony of human resource management is that it is premised on raising the capability of the workforce through incentives, whereas the top performers are typically the ones who can best ignore the incentive structure and focus on what they really like and know how to do.

Successful work relations involve retaining a greater share of that human drive, by signing a contract with a partner versus hiring an employee. Many will point out that smaller companies and startups already operate at that level, though there is considerable difficulty in making the principles of partnership work in the taller organization charts found in medium and large companies.

Paul Hawken once observed that “Good management is the art of making problems so interesting and their solutions so constructive that everyone wants to get to work and deal with them.”

Under the risk of falling from the immense heights of his reputation, I wanted to build on Paul’s observation with the following: Excellent management is the art of getting everyone to understand the big picture and find the problems themselves. This brings up the first two “commanding heights” of the enterprise:
You want your people to use their awareness of the big picture to identify the problems to be solved, self-organize towards the solution of those problems, and achieve that solution under the continuous pressure of financial and social accountability for their decisions.

Ultimately, you want that level of independence and self-direction to happen not only at the executive level, but at a departmental and individual level.

Taking the “resource” out of HR

A few weeks ago, while informally pitching this idea, I was asked whether this new workplace would have a place for individuals happy to work with well-defined, self-contained tasks. The answer was an unapologetic and resounding “no”.

This kind of tool-like employee would siphon executive attention from strategy towards pointing the employees at the right problems and towards keeping them moving. I don’t mean to be derogatory, the reality of today’s work relations often demand that kind of behavior.

In my early years as a software engineer I witnessed a spat between two senior colleagues. One was the most senior engineer in the team and the other a hard driven project lead with a classic command and control point of view.

In one occasion, a junior employee communicated release plans and dates to another internal team. These plans were current a couple of weeks before the communication, enough for the project lead to be infuriated by the break in protocol.

The response came in the form of a fiery email sent to the entire group, where the team was directed to not repeat the misdemeanor and reroute any information requests to the leadership team.

A few minutes later, to a general sense of vindication, a well written response was fired back from our senior colleague, in favor of information sharing over censorship. The email was closed with: “It is as much of an embarrassment for a colleague to misstate our current strategy as it is for him to be unaware of it.”

At this point, much of the above may sound common sense. Most people would be tempted to point at a myriad of examples of none of this being new. Abstract ideas often provoke that reaction, which brings me to a concrete challenge and excellent ice-breaker for departmental meetings. When the situation allows, ask yourself and your people:


What would you do if your next twelve paychecks depended solely on your own business decisions?”

If you get silence and you are not in a dysfunctional group, take a deep breath…actually take a deep breath anyway, you have a lot of work to do in that big picture criteria. Your people simply do not know enough about who buys your product and why. Even if they have initiative burning a hole inside them, they would not know where to point it.

In a better scenario, you will get questions about who buys the product and why. Time to introduce your production people to the sales teams before the next attempt at answering the ownership challenge.

On an average team, the first round of this challenge should reveal the need for better understanding of the customers and of the sales and pipeline chains. Peel that onion long enough and you will eventually pass through the need for a better requirements management process.

If you get a number of suggestions and the team is willing to bank their livelihood on these suggestions, start implementing as many of them as fast as you can.

One of the most fascinating aspects of the ownership challenge is that it is more than a question or the basis for an energizing team meeting: it is a mind set to be cultivated on a daily basis.

Cultivating this mind set is also more than asking the question every day, it is about letting the answers pervade the real business operations incrementally. Over the long term, you want not only your people to have those answers, you want your people to live by the reality of business results being driven by those answers.

Resurfacing the economy theme set at the top of this entry, you want your products and people to act as market forces. Just as an exercise, imagine an organization where people cannot rely on departmental boundaries to define their next assignment, where people are invited to work on projects based on their reputation, and where people must have demonstrable business results to back that reputation.

While you are at it, imagine executive chains attracting people on the merits of their business cases or on the ability of their managers to take on Paul Hawken’s challenge to make problems interesting and solutions constructive. Imagine people looking for their next position not on the basis of what they would like to be doing, but on the basis of where they think their next team would benefit the most from their skills.

…and regulating the markets

As with any market, the internal workforce market needs a minimal set of rules to ensure its functioning. This set of rules must answer some immediate concerns:
An unprecedented experiment

In this regard of institutional innovation, I find it fascinating that larger companies have a clear edge over their more nimble start-up competitors. Larger companies have the critical mass of people and products to form the internal markets. They also have tolerance for coordinating projects over longer periods of time.

Part of the answer lies in how well the chaos of a self-organizing workforce could be managed in a hypothetical transition and on the feasibility to make every individual aware of the big picture, of making people sufficiently engaged in offering solutions, or even comfortable to work with an added level of uncertainty in their work relations.

I have known quite a few individuals who would work well in such environment, though I must admit to a more than usual dose of unorthodoxy in these ideas. Ultimately, I see it as a matter of vision over hard science, even if as an experiment or as an extreme point of reference for a hybrid model.
----
Photos by serhio,
at October 07, 2009

I have seen these kinds of ideas applied specifically to defect triage in lean software development. Basically that the team lead should not assign defects; rather, they should be posted on a universally visible "board" and developers self-select the next defect to work on. In theory, the developers will be more motivated because they themselves selected the defects, and the potential workload imbalance will be policed by peer pressure.

I like the concept of peer pressure. Need to incorporate it into future postings.

What happens if no one takes on a particular defect that happens to be important to a critical customer?

You'd certainly have to factor severity and priority into the process. I.e. developers would have to choose something at the highest severity, but if several had the same severity, they would have their choice. Therefore, it's important when assigning severities to be granular enough that the critical ones get done first.

There is a big prize at stake here. Salaries are predicated on predicting demand. A system of productive collaboration that responds to demand (without having to predict it) will be more efficient and will relieve the need to create demand.

It's great to see a "set of rules" setting out how this might be achieved articulated. I do wonder though whether looking within the walls of a corporation in the right approach: is there not more potential to innovate past the corporation, to an individual and project-oriented economy?

I think corporations have something going for them in that they can combine a structure in forming coherent goals) and flexibility (in self-organizing around those goals) .

I would like to hear more about what you mean by an "individual and project-oriented economy".