Critical thinking and cows in the field 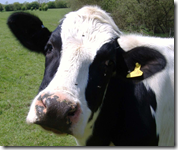 I heard this fictitious story as a joke some 20 years ago from my college-time great friend, Walfred Tedeschi, and it has stuck with me for all these years, first for the good joke that it is, then as a profound lesson in critical thinking.


In a gathering at the University, three students see a cow in a nearby field. One of them is a Mathematics student, the other a Physics student, and the other a Software Engineering student. Note: The fields and order of participation change depending on who tells the story, and I can say that as a Physics student at the time, Fred would not agree with my recollection, but it goes like this:

The Math student hears a mooing sound to his left, about 100 yards away, turns around and says: “Look, a cow” .

The Physics student turns around in the same direction, then adds: “A spotted cow”, with a slightly overbearing emphasis on the word “spotted”.

The Software Engineering student analyses the situation for a few moments, then concludes:  “At least on the side we can see.”

That punch-line is the one aspect that makes or breaks a great professional, in that it surfaces how different people may perceive the exact same situation (there is a cow in the field) with varying degrees of details and how those details may be factual (the visible side of the cow is spotted) or inferred (a cow spotted on one of its sides is likely to spotted on the other side) .

I don’t think this is the basis of a new philosophy graduation course, but it is worth telling people starting in their careers, both in the leadership and exact science fields, to guide the way in which we reach conclusions and how we trust information while making decisions or establishing a new hypothesis.

Later in life people may question why a cow in the field was even worth noticing, or whether the students were so distracted by the verbal sparring that they missed the sight of a golden unicorn a few hundred yards to the other side, but those are stories for a different time.
at October 30, 2013 No comments: Links to this post